The Portuguese Foundation for Science and Technology (Fundação para a Ciência e a Tecnologia, FCT) is the primary funding agency for research in Portugal. FCT is dedicated to promoting and developing all fields of research, from pure science to the humanities.  FCT’s PTCRIS program (www.ptcris.pt) provides a national integrated information ecosystem, supporting research management according to the best international standards and practices.

Ringgold works with FCT to help them create an integrated information ecosystem to support the management of national scientific activity.

FCT provides funding for research conducted across the country and tracks and manages research grants and output. Information had been contained in a disconnected array of national and international systems, data silos, and formats. Multiple systems were in place to manage specific components of research tracking, such as grants, thesis and dissertations, and research units. Portugal had two national CV platforms, and multiple systems performing one core function: research output management. Most systems were unable to effectively exchange data, and they were not aligned with international data standards.

To improve the infrastructure for researchers, institutions and FCT itself, a new technical and data framework was needed to achieve the following goals:

The key to providing the Portuguese government a reliable and robust way to manage the nation’s research activity lay in restructuring the data architecture and systems and adopting appropriate standards and persistent identifiers for all entities represented, including organizations.

PTCRIS, a system of systems or “SoS”, provides an infrastructure to transform the many information systems supporting scientific activity into a single, coherent and integrated ecosystem. To this end, this new framework consolidates functions and is built upon standards to ensure its long-term functionality. PTCRIS required unique, persistent, and globally-accepted identifiers for both researchers and organizations. ORCID and Ciência ID, the Portuguese national researcher identifier, were selected for individuals. 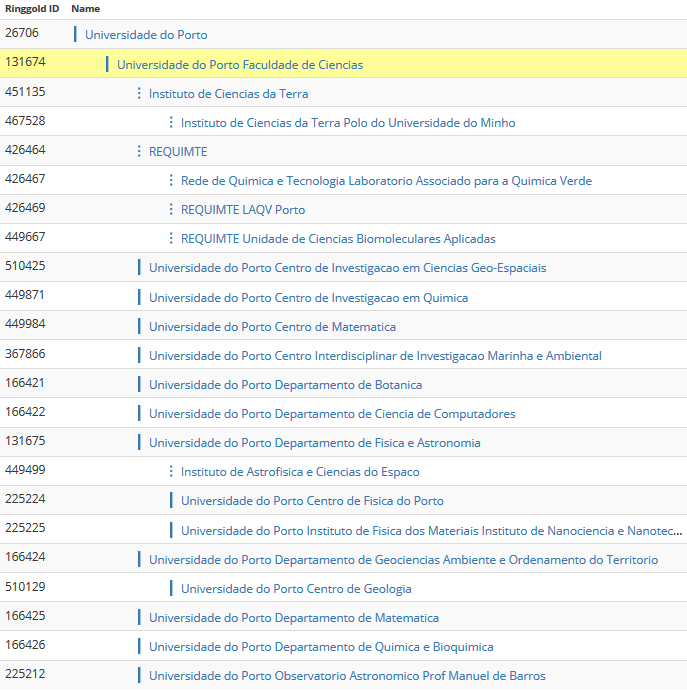 PTCRIS was formed in 2014, and the national organization database is an integral part of the CRIS Universe infrastructure. PTCRIS has developed a protocol for ongoing maintenance and expansion of the organization database, by regularly synchronizing data with Ringgold.

Systems which rely upon the national organization database have undergone successful usability testing, streamlining processes for researchers and other constituents. One example is the CienciaVitae CV platform, which was released in 2018.

By acting as a “glue”, PTCRIS allows greater interoperability between national and international research management systems.  Research will be more easily tracked and output reliably quantified, satisfying a core mission of FCT.

Over the coming years, PTCRIS plans to release new standards and infrastructure components based on international standards (CERIF, CASRAI), and to foster their adoption by national and regional research information systems.

By using Ringgold’s data along with ISNI’s open standard bridge identifier, we consolidated organizational information that was once scattered through a disconnected array of national and international systems. The resultant national organizational database represents a significant step towards our ultimate goal which is to develop a coherent and integrated information ecosystem supporting scientific activity.

Persistent identifiers and structured data such as that provided by ISNI, ORCID, and Ringgold will continue to be a key component of the system architecture.